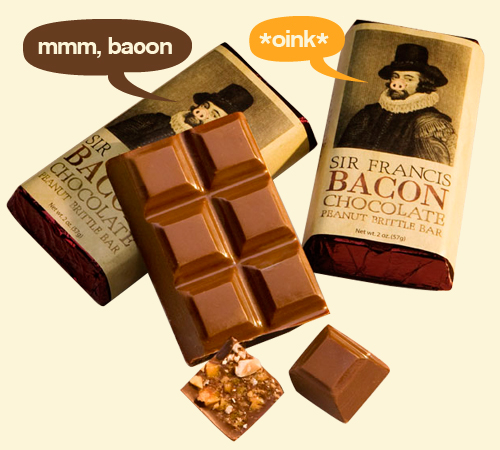 While pondering the craziness of Peanut Butter Cup Chicken Mole, I thought about the equally crazy but widely accepted (thanks to Elvis) combo of peanut butter and bacon. Why not throw some chocolate in the mix, right? I briefly mentioned Sir Francis Bacon Peanut Brittle a little while back, but have since been in touch with the folks responsible for it and am here to share more info.

They started out making Bacon Peanut Brittle which then morphed into a chocolate bar. As you can see in the above photo, one side of the chocolate bar is engraved with squares as any average chocolate bar might be, but the underside is bejeweled with bits of bacon and peanut butter brittle. Crazy, huh? 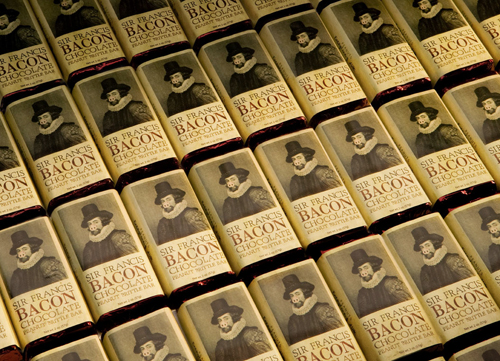 The thought of bacon in your candy bar might be a little bit frightening if you’ve never tried it, but the hilarious Sir Francis packaging* might help ease the tension a bit. I mean, could you really wuss out when a guy with a pig nose is staring at you like that? He’s totally mocking you. Don’t let him do it!

Of the product, it’s creators say:

It's one of the finest examples of the holy trinity of flavor: sweet, salty and savory. And the bacon, from one of the world's foremost artisans, adds a very distinctive (and from what people have told us) addictive quality to our products. The chocolate bar is slightly less aromatic [than our brittle], and that's because the bacon brittle pieces are enrobed in the milk chocolate. But there's just enough bacon flavor to create a very complex and blissful experience.

The bacon used in the Sir Francis is very smokey. To be honest, it’s a little too smokey for me personally since I prefer a milder maple-smoked bacon, but if you like the strong stuff, this is for you. As my mom would say, “it’ll put hair on your chest.” Despite what your preference may be, I still suggest you try it, because maybe you’ll end up discovering a favorite new treat for yourself!

*I wrote in my previous post that Jeff Oehmen designed the packaging, but I’ve since been corrected that while he participated, it was created by Hatch, Inc. Hope they get a full website up soon - I’d love to see more of their work!