Back with a bang! A Review of Molly's Cupcakes Hi people! I missed you during vacation, but I’m back to share some fun chocolate and peanut butter adventures from my road trip to Michigan and Illinois.

Taste Tester, Taste Tester’s brother, and Jackie Brown (our Chocolate Labrador) and I drove from New Jersey to the Canadian Lakes in Stanwood Michigan, stopping in Ann Arbor on the way. After our stay in Stanwood, we spent a couple days in Chicago and then headed out for the long drive back home to Jersey. We tasted some truly delicious treats along the way! I’m not going to go through them in any particular order, so even though Molly’s was one of the last stops on the trip, we’re just going to go ahead and get to that first.

I first discovered Molly’s from some photos on flickr. Molly’s only had a temporary site at the time but it had some fun animation and a pretty logo and since I’m a sucker for both cupcakes and good design, I tucked it away in my bookmarks and made a mental note to check back sometime to find out more info. Taste Tester and I visit Chicago often (we both used to live there), so odds were good that we’d get to try these tasty looking cupcakes at some point. To give you some perspective, at this point in time my favorite cupcakery in Chicago was Swirlz and my favorite cupcakery in the USA was Misha’s in Florida. Both of those cupcakeries are pretty damned good, so it wasn’t that I had low expectations of Molly’s, but after indulging in half a dozen of Misha’s Cupcakes the week before, I didn’t expect to be blown out of the water.

Well I should have.

I mean, just look at this cupcake! 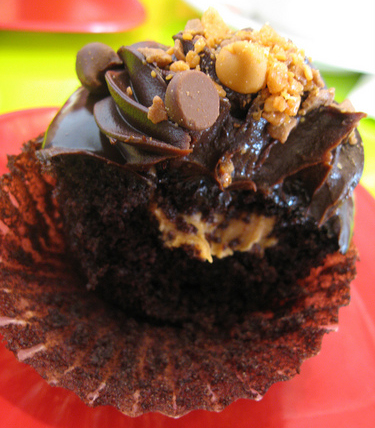 And let me tell you, this cupcake lives up to it’s looks. I was blown away. Here’s the full description: (If $3.75 seems a lot for a cupcake, calm down; this is only the price for the fancy filled cupcakes. The regular cupcakes are cheaper, but only a crazy person would pass up this cupcake over it’s price anyway!)

Here’s some detail on it’s components:

The filling: The peanut butter filling didn’t taste like there was any sugar or butter mixed in, as is the norm with most peanut butter fillings and icings. If there were other ingredients, they did a great job hiding it because it tasted very, very peanut buttery. I’m a little confused by the cupcake’s description - it looks like it says PB & Butterscotch filling, but I could have sworn they were filled with straight peanut butter. Whatever the case, the filling was great.

The ganache: The ganache topping was wonderfully chocolatey and thick. One thing that’s hard about loving very dark chocolate is that most of the time when I order a dark chocolate dessert from somewhere, it’s too sweet, and not dark / bitter enough. Half the time I need to chase my dessert with a bite of real dark chocolate to satisfy my sweet tooth, which is sad. But halfway into this cupcake I was ready for a glass of milk and a nap. It was awesome.

The cake base: The sole complaint I have about the Ron Bennington is that the cake itself was a teeny bit dry. I still don’t know what Misha’s Cupcakes does to their cupcakes, but theirs are just so freaking moist. To review this cupcake, I tasted all of the elements individually - the cake, ganache, filing - and then took big bites, tasting the cupcake as a whole. When eaten together, you don’t notice the dryness of the cake because the super creamy ganache and filling balance it well. But a bite of the cake on it’s own was just okay, nothing spectacular. I’m not going to get to petty about this though. On the whole, it was an incredible cupcake. Maybe it doesn’t quite get the A+ but definitely an A / A-. Bravo, Molly!

The name: The people behind the counter were very nice despite my picture taking in their cafe (some places get annoyed with that). I asked why the cupcake was named after Ron Bennington and they said he’s an XM radio host and a friend of one of the guys that works there, so he got to make his own cupcake. Lucky bastard.

I also took a bite of my friend Adam’s Mini Red Velvet (see below - the other cupcake in the foreground is the Strawberry shortcake). Normally I love cream cheese icing, but sadly this one didn’t do it for me - it was too tangy for my taste. I’ve been buying Temptee cream cheese lately instead of Philadelphia because that sour tanginess is a little too much. I only had a very small bite though, so I’d be willing to give it another shot. This was also disappointing because we already ordered a dozen cupcakes to take home, a third of which had this cream cheese frosting. Also, when we got home and opened the box we were sad to discover that they forgot to give us the other two Ron Bennington Chocolate Peanut Butter Cupcakes we ordered! We were leaving first thing the next morning so there would be no opportunity to get more before leaving Chicago. At least I had a Chocolate Mousse Cupcake to ease my sorrows. This was essentially the same as the Ron Bennington, with chocolate mousse filling instead of peanut butter and no butterscotch peanut butter topping. So it was hard to be too upset when I had that to console me.

Despite the slightly dry cake, less than perfect cream cheese frosting and forgotten Ron Bennington’s, I have still been salivating while writing this review and would jump at the chance to eat another cupcake from Molly’s. It might not have been perfect but what in this world is? It’s a fun, friendly cafe that churns out delicious treats. If you are in the Chicago area, stop by and treat yourself.

Also, I may not have been nuts about the cream cheese frosting myself, but my friend Susan loved it. Adam also gave the thumbs up for the Key Lime and I enjoyed the Tirimisu, so there are plenty of great flavor options (even for vegans). They also have “Dirt ‘n’ Worms”, one of my all time favorite childhood desserts. This dessert, the swing set, sprinkle station, board games and well… cupcakes are all things that will tap into the kid in you when you set foot into Molly’s.

They still only have a temporary site, but you can check out their pdf menu for more info. You can see more photos from my visit on flickr.