Hi, My Name is Kristina and I'm… a Vegetarian? 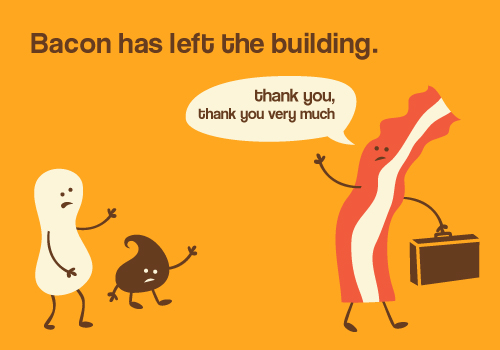 I was starting to get tired of the “bacon in everything” trend (no offense, Elvis) but never thought I’d be one to call myself a full-blown vegetarian. I still don’t totally believe it. It’s something I’ve long thought about doing, but never thought I could do. Turns out, it’s pretty easy!

Why?!? This change was somewhat goofy given a recent conversation with my husband. A few months ago, he asked that I cook only vegetarian meals at home because he felt like he was overdoing it with meat. At the time I resisted, calling him a crazy foo. Meat just seemed so much easier to make after a long day of work; slap a rub on it, fire it up and a few minutes later you’re done. Vegetarian meals - good ones, anyway - seem to require more ingredients, seasonable consideration, additional chopping and time. I didn’t actually call him crazy, but I politely vetoed the request. “Hubby, I love you… but no. Now eat your pork chop and shut your hole.”

Okay, I’m kidding… he was eating beef. Duh do chhh!

Then one day, feeling like I needed a change myself, I flipped a switch and decided to try vegetarianism.

Not Mom-Approved Shortly after making the change, I had a dream that I gently broke the news to my arguably set-in-her-ways traditional Italian mom after she caught me neglecting her meatballs over Sunday night dinner. She was instantly outraged and yelled at me. “Vegetarian??? What are you going to eat?!? Fuggeddabouttit!!!” I actually woke up sweating and the dream scared me so bad that in reality, I waited 3 months to tell her. Suffice it to say, her real-life reaction made me feel a bit clairvoyant. Heh.

A Veg-Friendly Zone… in the South? More recently, my husband and I decided to spend a month working remotely from Austin, TX. I feared the imposition of constantly being bombarded with BBQ and being forced to live off a diet of cornbread and beans, but that goes to show how little I knew about Austin. Turns out it’s a super special diet-friendly town. Sure there’s plenty of meat to go around, but there’s also plenty of vegetarian, vegan and even gluten-free options. I feel right at home.

Where do you stand? Do you eat a lot of meat? Have you ever considered a change? Would you? I’ve noticed that most people don’t think much about their seemingly normal ways until someone shines a light on them. I certainly hadn’t acknowledged my meat-heavy diet until Taste Tester brought it up. I hadn’t previously had the motivation to change, but there’s plenty of reasons to. Now that I have, it feels great!

More Scientific Reasons for Going Vegetarian If you’re curious about the benefits of vegetarianism, check out The PB&J Campaign. It’s an interesting site and just might make you consider changing a little, whether it’s with one single meal or many.

Don’t Be Scared Just a heads up that if you do it, people will look at you like you’re crazy when you tell them you’re going vegetarian. I’ve gotten plenty of quizzical looks and heard, “Why?!?” a lot, but those moments are mostly entertaining. Give it a whirl. And when they inevitably ask “Why?!?”, ask them, “Why not?!?”.

And when they respond, “because meat is delicious”, you can retort, “so is peanut butter.” :-)