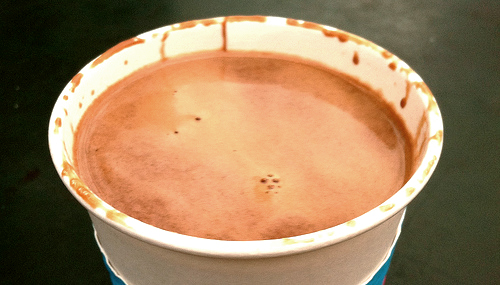 Pictures of hot chocolate never seem to quite do it justice. No matter what angle or how nice the camera, it just looks like a cup of unassuming brown muck. But trust me when I say it: this is some damned good hot chocolate; some of the best I’ve tasted recently. The balance of chocolate and peanut butter is great, but what really makes it is the saltiness. It’s not some measly “hint” or a “pinch” - the evil awesome genius wizards at Shake Shack who whipped this up aren’t shy with it and that’s a wonderful thing. I might now end up adding salt to my homemade batches of hot chocolate - and recommend you to do the same!

Joining me on my Shake Shack quest was my friend and fellow food enthusiast, Joe who I told would be made famous by being on this blog. I may have exaggerated slightly. :-P But as a self-admitted food nerd, he’s one of the few people I can take food photos in front of who doesn’t give me strange looks, so kudos to him for joining me. He skipped dessert and dug into one of their famous burgers while I sipped my cup of CPB bliss. 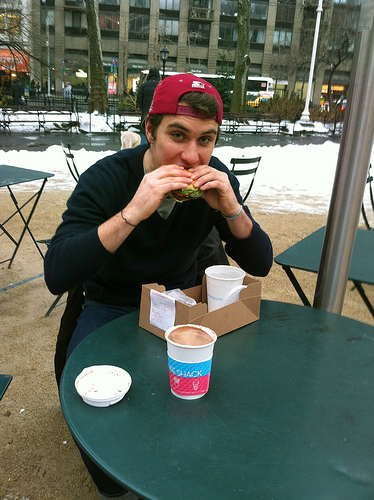 You may think it a little nutty to eat at an outdoor cafe in the winter, let alone on a snow day, but I think the trek in the cold made this warm cup of chocolate good-ness taste even better. Plus I assume the hot chocolate is seasonal, so grab your boots and mittens and high-tail it to Shake Shack - now! If you’re in the mood for more hot chocolate, feel free to join me on a personal mission of tasting everything on this Serious Eats list of the Top 10 Hot Chocolates in NY. If that’s not a New Years resolution for winners, I don’t know what is.

On another side note, later that night I had dinner at Elizabeth where I was tempted by their rice krispy treats served with chocolate peanut butter fondue and marshmallow. After that rich cup of hot chocolate, I had no capacity for it and yet it was still difficult to walk away. So many delicious things to eat in this city and so little time!