Great Treats on a Great Mission 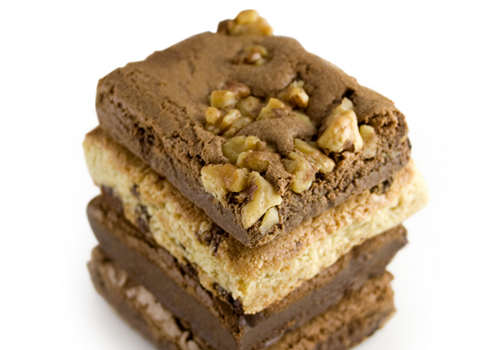 Brownies have long made me smile and given me that warm, fuzzy feeling inside. I felt that way on Thursday as I walked around a brownie factory - but the feeling wasn’t just because the brownies were delicious- it was also because of the inspiring and unique story behind them.

Together with Ben & Jerry’s, Greyston Bakery opened it’s doors for it’s first VIP Blogger tour, hosting a bunch of press / bloggers like myself to learn about their bakery’s story and what they’re doing to better their community. What are they doing, you ask? Lots! Way more than simply baking brownies, that’s for sure. Here’s a rundown of our day in the bakery and what we learned about it.

Zen Brownies The first segment of the day was learning all about Greyston Bakery and The Greyston Foundation - how it all got started, how it’s progressed over the years and what it is today. It was started by Bernard Tetsugen Glassman, a former aerospace engineer who became a Zen-Buddhist priest. He decided to open a small bakery to create high-quality, great tasting treats as a means of serving his community and helping it’s people, namely the ones who need the most help. As the bakery’s mantra states, “We don’t hire people to bake brownies; we bake brownies to hire people.”

Next Up: Ben & Jerry’s Bagels?? A couple of very friendly reps from Ben & Jerry’s were there as well to talk about how much the ice cream guys enjoy and appreciate their relationship with Greyston Bakery. The love was definitely mutual as each company emphasized the benefits of the relationship. Once you compare Greyson’s Social Mission and Ben & Jerry’s, you’ll understand why these two get along so well.

Oh, and we learned a fun fact: when Ben & Jerry were thinking of what business to start, it was between their love of bagels (it’s apparently hard to find a good one up in Vermont) and ice cream. However the bagel machinery was too expensive, so they went with the ice cream. I love me some bagel, but glad they went with the latter! Although maybe they’d be making Chocolate Fudge Brownie Bagels? Hmm…

Blondies Have More Fun Next, they gave us funny outfits and made us slave in the kitchen. Kidding, kidding - they gave us tasty blondie batter and we happily customized our own batch of Do-Goodie Blondies with various add-ins. Here’s me and my friend Kate, ready to get to work. We hope to start a new hairnet fashion trend. Here’s more of the group doing some blondie decorating. Time to Make the Brownies! After whipping up our blondies on a small scale in the bakery’s R&D room, we got to head into the other rooms where the real magic happens on the big machines. The elevator wasn’t made of glass and didn’t go sideways, and slantways, and longways, and backways but other than that it was really fun to explore. You can check out my Greyston Bakery flickr set for more pictures and video of Do-Goodie’s brownie-making rooms. The factory smelled very strongly of brownies; it was a little challenging to keep my composure, but I managed and even got to step in and work the line with the employees for a minute. They were super friendly and more than happy to chat with us.

Hugs, Not Drugs After running around the factory, we had a talk with HR and heard from a handful of the bakery’s employees. We learned all about the open-hiring policy where people are interviewed based on the order that they come, not on their personal or professional histories. They weren’t required to disclose their backgrounds to Greyson prior to being hired, but openly shared their personal stories with us - stories of dyslexia, drugs and jail. It’s sad to hear that anybody would be in these positions, but hearing stories where they were able to overcome their troubles and thrive is nothing short of awesome. They all remarked that they owed their transformation to Greyston. The bakery did a great job of keeping us well-fed on the tour, but I wished they had given us kleenex for this segment. It was really touching and tear-jerking.

Raising the Roof Next, we headed up to the bakery’s rooftop where we were shown a few other buildings associated with the bakery as well as a nice view of the Hudson River. Hm… friendly people, brownies everywhere and a nice view… where do I sign up? Community Gardens After the rooftop visit, Ariel Hauptman, the bakery’s Business & Development Manager took us on a small tour around the neighborhood. The first stop was to one of six Community Gardens owned by the foundation. These gardens provide a fun and educational activity that supplies the community with high-quality produce. Plots are in very high demand so Greyston in the process of obtaining more land for more gardens. I don’t know much about gardening - do you think cocoa trees can grow in Yonkers? How about peanut plants? Child Care Center Next, we visited Greyston’s Child Care Center, where they care for children ages 6 weeks - 5 years from 7am - 6pm. You can read more about it and check out the other admirable programs on The Greyston Foundation website. Be careful if you get to go visit the Child Care Center though - you’ll totally be jealous of nap time! Lucky kids.

Snack Time The day ended with a lot of treats. Here’s Lisa, Director of Sales & Marketing, operating the ice cream scoop. She dished up flavors of Ben & Jerry’s ice cream that contain the bakery’s Do-Goodie Brownies. The brownies are great on their own, but they’re also great soaked in ice cream (shocker, I know!). Ben & Jerry were originally going to use the Do-Goodie brownies to make ice cream sandwiches but, “the folks at Greyston hadn’t given the brownies enough time to cool before packaging them, and as a result, they stuck together in 50 pound blocks of brownie bliss.” I personally would be doing a little dance at owning what’s probably the biggest brownie ever, but Ben & Jerry decided to chop it up and add the brownie pieces into ice cream. So this funny turn of events inspired Chocolate Fudge Brownie, followed by other brownie-packed flavors, such as the aforementioned Half-Baked, Magic Brownies, Chocolate Fudge Brownie Fro Yo and Half-Baked Fro Yo.

While we enjoyed our ice cream, Joe from Sales & Marketing showed off the latest holiday items from Do-Goodie. What’s that? Ultimate Brownie Sundae Kit? Yes, please! As if letting us run around their factory and eat our weight in brownies and ice cream wasn’t nice enough, we even went home with treats from both Greyston Bakery and Ben & Jerry’s. Lots of goodies, edible and non-edible. I think I can speak for everyone there by saying we went home enlightened and moved by what the bakery, the foundation and Ben & Jerry’s are doing. It’s an incredible thing to see so many good-willed people coming together for a good cause and as an extra bonus, to be making awesome treats while they’re at it. One point that was repeated between a few of the employees was that the bakery saved their lives and they were so grateful and happy. It was clear from seeing the raw emotion as they spoke and from seeing them work on the factory floor, that they weren’t just reciting words; the feelings were deep-rooted and heart-felt. It was a truly inspiring and delicious day.

If you’d like to know more, visit the Greyston Bakery website. If you’d like to make a donation to Greyston Foundation, click here. And of course - hello - don’t forget to try the brownies! We heard multiple times throughout the day that the Brown Sugar Blondie was everyone’s favorite. It’s super soft, moist and full of brown sugar and caramel undertones with hunks of belgian chocolate. It’s awesome, though my personal fave is the Espresso Bean Brownie. It’s so rich and chocolatey and full of cocoa nibs, plus I’m a sucker for coffee-flavored desserts (much like I’m a sucker for CPB desserts). You can’t go wrong though - try em all here and enjoy! We certainly did.