Monday was my mom’s birthday so I took the day off to spend the afternoon with her and see a movie. What we didn’t realize was that the relatively harmless looking romantic comedy Going The Distance is a surprisingly raunchy movie filled with jokes that, put simply, you don’t want to be sitting next to your mother for. Cue fidgeting It didn’t help that we were the only people in the theater for the mid-day showing.

See? I wasn’t exaggerating. There was literally no other human being, aside from the usher who was probably giving us dirty looks for giving him something to do. 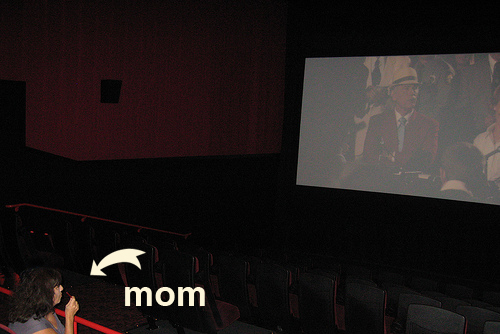 We enjoyed the movie despite the abundance of not quite mom-friendly jokes. Even still it left a touch of residual awkwardness in the air, which we helped extinguish with a trip to Dunkin Donuts across the way. There was a new donut being advertised called the “Monkey-See Monkey-Donut”, a donut filled with bananas foster filling, covered in chocolate icing and topped with Reese’s Peanut Butter shavings. You know I couldn’t walk out without trying it.

The new flavor was created by Rachel Davis from MA who entered the donut in the “Create Dunkin’s Next Donut” contest. You can see a video about the contest and her victory on the Dunkin Donuts website. How nice for us CPB’ers that the winning donut is chocolate and peanut butter! However even though my favorite two ingredients are present in this creation, the banana is definitely the dominant flavor. The banana filling is very light and creamy and tastes like a cross between the filling in their Boston Cream Donut mixed with a surprisingly strong banana flavor. I don’t know what kind of cream they use or if there’s yogurt in it, but it even seems slightly tangy. The Reeses shavings don’t add much peanut butter flavor, but I think larger chunks of Reeses would have adversely affected the sink-your-teeth-in-soft texture of the donut. It’s sweet and tasty and goes nicely with a cup a joe.

A visit to DD was all too appropriate on my mom’s birthday since she’s been a Dunkin Donuts devotee for as long as I’ve known her. However she passed on the offer to try my donut because she hates - that’s right, hates! - peanut butter. I love you anyway, mom. Happy Birthday!