Three weeks in the Chicagoland area sounded like a long time and yet it flew by. We saw lots and ate lots on our trip. We had one last weekend in the city before leaving the area and tried to make the most of it.

We took an architectural boat tour down the Chicago River… took in a Cubs game where they actually won… …and ate lots and lots of treats! I had made a list of Chicago sweets I wanted to hit during our trip and we got to taste quite a lot of them. Next up was a cute little coffee house in Bucktown named Ipsento. I had seen praise on Yelp for their Nutella Mocha and knew I had to taste it. I am a fancy-coffee-drink kind of gal and this was right up my alley. I was actually a little hesitant, thinking it might be too rich for me at that exact moment, but it was perfectly balanced. It was indulgent, but just light enough that you could drink the whole thing without feeling ill. The chocolate hazelnut flavor was delicious while calm and soothing. If Ipsento was in my neighborhood, this drink would be a regular purchase for me, without a doubt.

They even had a batch of coffee beans roasting in the front area while we were there, so we left with some of their Organic fair trade beans in tow. 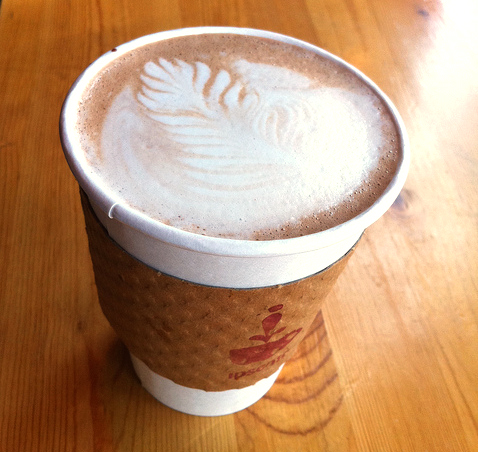 Also on my list were (of course) cupcakeries. Sadly and surprisingly we didn’t get to hit up our favorite standby, Molly’s, (Ron Bennington! Peanut Butter Nutella!) but we did try two new awesome cupcakeries: More Cupcakes and Sprinkles.

Somehow More only has a 3 1/2 star rating on Yelp, so I’ll admit to not having super high hopes. However, I’m happy to say that this particular time, Yelp got it wrong. This place was awesome!

Unfortunately I accidently deleted my photos during the first sync with my new iPhone. This one survived because I tweeted it before the tragic photo loss. I asked the girl behind the counter about chocolate and peanut butter but she said that the owner’s daughter is very allergic to peanuts so they don’t use them. I respect that, though I will simultaneously cry a little on the inside. These cupcakes were so good that I imagine angels would sing if they made a chocolate peanut butter version. Sigh

Taste Tester, Adam and I conducted our own little cupcake flight, splitting all four cupcakes between us. All were great, but the Chocolate Caramel easily took 1st place. The moist chocolate cake was filled with rich, gooey caramel that slowly oozed out as I cut it open. It was topped with layers of rich chocolate frosting and fluffy vanilla frosting. I’m pretty sure if I lived nearby I’d eat one of those every single day (so it’s probably a good thing for my health that I don’t). I went back shortly after our tasting to pick up extra cupcakes for friends. On the way there, I passed a lady in a chef’s coat and after checking out their website, found out that it was the owner. Had I known at the time, I would at least have high-fived her or something. Thanks for sharing your awesome treats, Patti!

As good as they were, I still wanted to find chocolate and peanut butter before leaving The Second City. Luckily, Sprinkles was mere blocks away, so we swung by for our second cupcake flight.

Sprinkles is a well regarded chain that somehow doesn’t have an outpost in NYC (though according to their site, an uptown location is slated for Feb 2011. Woo!). Walking up to it was a little intimidating - I’ve heard so much about it, including talk of this celeb and that celeb loving it - I was excited to finally get a taste! The pretty decor only amped up my excitement.

I loved the exterior - it felt like the entryway to some kind of cupcake theme-park fantasy land. Staring at this window display, I half expected a soothing female voice-over to come on… “Welcome to cupcake heaven. Sit back, relax and enjoy the sugar high.” We walked in and promptly said hello to the lovely chocolate peanut butter cupcakes that awaited us. Of all that we ordered, I tasted the Chocolate Peanut Butter, Vanilla w/ Raspberry Frosting, Vanilla w/ Strawberry Frosting and Dark Chocolate. The best of the bunch was the Chocolate Peanut Butter and the worst was the Strawberry (the Strawberry frosting tasted mostly of butter than anything else - hate that! But the Raspberry frosting was delish). The peanut butter cake was moist and had a strong peanut butter flavor. Taste Tester described it as tasting similar to Elinor Klivans’ CPB cupcakes, which is saying something because he LOVES those. Theirs had chocolate chips and was covered in chocolate frosting. The chocolate frosting had a really nice not too light / not too heavy texture and was perfectly chocolatey. It was great on both the peanut butter cake and the regular chocolate cake.

Note that the background of this photo is a messy table. We had just stuffed ourselves with a delicious brunch at Dodo and proceeded to consume half a dozen cupcakes. That’s right - we don’t mess around. We wanted to pack in all of the deliciousness that we possibly could on this trip. And so we did! Next came my second hot chocolate of the trip from XOCO. I think I may have given Taste Tester a deaf ear from going on about how much I enjoyed my first Barcelona “bean-to-cup” hot chocolate. Our intention on this particular night was to go out for deep dish but I was totally genuinely sad to find out that there was a 2 hour wait which forced us to eat another delicious meal at XOCO. Bummer! (Tee hee!)

This badly lit camera-phone shot doesn’t even do it close to justice. It was incredibly rich, thick and ahhhmaazing. It trumps City Bakery’s famous hot chocolate for me - seriously, that’s how good it was. We polished off our sweets tour that night with a stroll down Navy Pier. A little walk only seemed fitting after downing 8 million calories, don’t you think? Before leaving the area the next day, we met friends for a quick breakfast at one of our old haunts, Alliance Bakery in Wicker Park. I had a tasty Ham & Cheese Croissant, promptly followed by a breakfast dessert of Chocolate Peanut Butter Macarons. As you may know, I get a little extra excited at finding a chocolate peanut butter treat that I’ve never had before, and this was one of those times. Did I mention that I LOVE macarons? This particular macaron basically tasted like a light Snickers bar in macaron form. I say ‘light’ because for as rich as it looks and sounds, it wasn’t all that intense. The chocolate cookies seemed to have a milk chocolate flavor instead of a darker chocolate and were filled with some kind of chocolate peanut butter frosting. They were especially light on the peanut butter flavor, but big pieces of chopped peanuts helped bring it up a bit. There was also a bit of caramel hiding inside. Overall, they were good but not mind-blowing. Their mere existence was enough to make me happy, though. And happy is a good way to end a trip!

Whew! That was a lot of sweets. Here’s a cheat sheet if you’ve lost count:

For more of my pics from Chicago and it’s various eateries, visit my flickr set. For more Chicago sweets check out my previous posts here and here.