The Joycup Co.’s slogan is, “not your everyday chocolate cup.” I’m not sure that these treats could have a more fitting motto.

Danna started The Joycup Co. in September 2009 after retiring from a career as a probation officer. Of the inspiration for her new company, she notes, “I’m amazed by how many tortured peanut butter cup lovers are out there like me, left wanting by the limited quality choices. I suppose that’s why I began making my own in the first place, and why they’ve evolved with my cravings for tarty fruit and salty-sweet combinations I can’t find anywhere else.” The adorable little package of peanut butter cups was clearly put together with a little TLC. The materials are environment-friendly (& made in the USA), attached to the box was a hand-written note and each cup sits in a cute candy wrapper, decorated with various patterns that are the key to telling you what each cup flavor is. The flavors in my box were: There are some crazy people out there that have the food philosophy, “it all goes to the same place” and don’t really care about how pretty their food is. I’ve never understood this because you eat with your eyes first and eating pretty food is so much more fun! Flavor aside, part of the joy of eating Joycups is that it’s fun to pop something so cute into your mouth. Every peanut butter cup out there is ever so slightly different. Some companies use the classic milk chocolate / pb combination while others use darker chocolates. Sometimes the chocolate exterior is very thick and other times not so much. Some peanut butter fillings are soft and creamy while others are chunkier. Most flavored peanut butter cups that I’ve seen (maybe all) have a layer of peanut butter topped with a layer of jelly, surrounded by chocolate. I knew my box contained flavored cups, so you can imagine my surprise when I cut into each Joycup and though I knew they were flavored, saw no visible layer of fruit filling. I took a bite and realized that it was no mistake - her added flavors are mixed right into the peanut butter. I have eaten many a peanut butter cup and am not sure I have come across this technique before. The texture of the peanut butter filling is somewhat thick not far off from that of the Reeses Peanut Butter Cup. However, the flavor is remarkably different, which may partly be due to the freshly ground organic peanuts she uses. You can actually taste the variety of salts used in each cup because they are coarse. As each peanut butter cup disintegrates in your mouth, you can feel and taste the salt granules. She uses artisan salts and premium chocolates and supports sustainable agriculture & local businesses.

Danna’s home serves as inspiration for the flavors of her chocolate peanut butter cups. She uses ingredients that are organic, fair trade and locally grown or purchased, “for savoring the all-natural essense of paradise: California’s Central Coast.”

It seems that there are a lot of companies out there now that are just trying to hit up the environmentally-friendly & green notes as a way of getting in on the current trends but you can tell by reading the literature on Danna’s site and talking to her that she’s doing it out of sheer love of her environment. She informed me, “I’m currently working with a local certified organic fruit farmer to include his blueberries, raspberries and olallieberries in my Joycups, once they’re ripe and ready for picking!”

Before my Joycup experience, I had never heard of an olallieberry before. According to Wikipedia, “the olallieberry is a cross between the loganberry and the youngberry, each of which is itself a cross between blackberry and another berry (raspberry and dewberry, respectively).” She says that, “Olallieberry is huge here on the Central Coast of California, especially the colder north coast areas because this semi-tart berry favors cooler coastal, foggy climates.” It’s cool that she chose this berry since it represents her area. 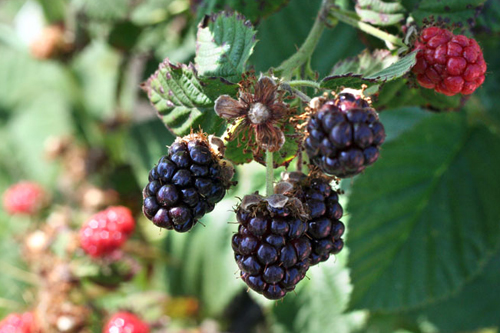 Photo credit: This Week For Dinner

It also makes sense that her chocolate supplier would be a company out of California. I am not super familiar with Guittard Chocolate but have heard good things about them, especially their baking bars. Their dark chocolate complements Danna’s fillings very nicely and as her website points out, it contains no preservatives, additives or gluten.

Revel in the joy of chocolate and peanut butter with a little help from The Joycup Co.!