Taste Tester and I both celebrated birthdays last week, and you can be sure that there were plenty of desserts… and then more desserts, oh and then some MORE desserts, land some desserts after that. It was my kind of birthday!

SWEET AND SALTY Early in the week, Taste Tester made these unbelievable Salted Fudge Brownies. They were made with Maldon Sea Salt. Wow! This is an awesome recipe, and it’s totally worth spending a little extra on the special salt - the brownies wouldn’t be the same without it. This recipe happens to be pb-free, but I’m fully confident that this salt would work wonders with both chocolate and peanut butter. I will be sure to let you know if I have any successful experiments with it.

ICE CREAM SOUP-WICHES Unfortunately my birthday baking didn’t go quite as smoothly as Taste Tester’s. I came up with the brilliant idea to serve different types of ice cream sandwiches at our pool party. Who wouldn’t love a cool hand-held treat on a hot summer day, right?

So I spent considerable time making 3 different types of cookies - chocolate chip, peanut butter and sugar. It was a bit labor intensive, but the cookies all came out perfect, so I was anxious to taste the finished treats! We don’t have an ice cream maker, so we opted for store-bought chocolate and vanilla ice cream.

Little did I know what a mess it is to put these little buggers together! I let my ice cream sit out because it’s easier to work with soft ice cream so that when you push on the soft cookies to smush the sandwich together, they don’t break in half. Unfortunately I was counting on immediately transporting the sandwiches to the freezer so they could firm up, without realizing that our freezer wasn’t getting as cold as it should be. So when I opened the freezer a bit later to check on them, they turned into a messy pile of cookies in ice cream soup. 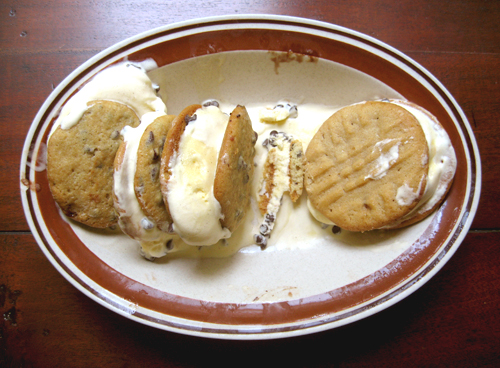 I thought I had been prepared ahead of time to make what seemed to be like an easy dessert. I even watched a video on Martha Stewart’s site where the owners of How Sweet it Is show how to make their popular chocolate peanut butter ice cream sandwiches. Despite the prepwork I still didn’t get it right!

Luckily, my mom has two freezers and the other one was working, so I transported the soupy messes into the working one to harden up. My guests had to pry the cookies from the dish but in the end, no one cared what they looked like and devoured them just as quickly as if they looked adorable. Lesson learned: flavor trumps aesthetics. The perfectionist in me found it to be a hard lesson.

I managed to get a half-way decent picture of one of the more successful sandwiches: So I’m not going to lie, if you are a homemade-icecream-sandwich virgin, you will likely get elbow deep in ice cream and probably drip chocolate ice cream all over your mom’s nicely cushioned kitchen table chairs (sorry mom!) but you will end up with some darn tasty and better-than-store-bought treats. Just make sure your freezer is alive and kicking first. Here are the recipes:

Peanut-Butter and Chocolate-Ice-Cream Sandwiches by How Sweet it Is in NYC. I don’t have an ice cream maker, so I filled mine with Edy’s instead. The cookies were really good so I think they would make a great ice cream sandwich if paired with a really dark chocolate ice cream. The Edy’s didn’t do it for me, so maybe if you have an ice cream maker you should attempt the homemade filling instead.

Mini Chocolate Chip Ice Cream Sandwiches - I love that they describe these as “dainty”. I could come up with a few words to describe what mine looked like, but “dainty” isn’t one of them. At least the cookies were really soft and tasty.

And for the sugar cookies, I honestly cheated and used a tube of sugar cookie dough. Don’t shun me - they were great with ice cream!