I wish I had taken a picture of this marvelous brownie with a bite taken out of it. It was so moist that the inside was glistening. Of course if i let myself think about how much butter it took to get it to glisten … well … i just prefer not to think about it. What is this a health food blog? Nope! Moving on…

When I first heard about Baked there was something about them that kind of annoyed me. They seemed to be a copycat of Chocolate Bar, a nyc chocolate shop that I liked very much. They had a similar looking site, logo and color scheme (their look is a bit different now and they have a new site). And even though I like to think I judge purely on taste, the visuals are definitely a factor for me. As a designer I don’t like copycats so I was a little offended to see that someone copied one of my favorite little NY chocolate shops.

It turns out the reason behind this similarity is that one of the founders of Baked is a former founder of Chocolate Bar. Mystery solved! I should totally be a detective, no? Solely based on the fact that their look annoyed me, I never really made the effort to seek out Baked’s baked goods. However, I now come back to write this review with my tail between my legs because I was completely wowed by this brownie and am sad that I have been missing out all this time.

Their Peanut Butter Brownie is to me is what a pb brownie should be; it fit my five qualifications: deeply chocolatey, peanut buttery, rich, moist and dense. I will never understand those fools that prefer cakey brownies to dense ones. I mean seriously, go eat a piece of cake and leave the brownies to the people that know what they’re doing.

The people at Baked know what they’re doing.

At any given time I have multiple treats in my kitchen, so I don’t always get to eat and review them right away in the hope to avoid a diabetic coma. This brownie sat for 2 or 3 days so I almost wonder if the same phenomena happened to it that happens to Misha’s cupcakes, which is that they seem to get better and more moist as they sit. I guess I will have to make a sacrifice and eat another to find out for sure - I am just that dedicated to my research.

Please do yourself a favor and go get a Baked brownie. It’s so good it might be enough to convince me to purchase their cookbook and maybe even some chocolate granola.

And I am quite jealous that the two guys that started it are designers that went and started their own coffee shop / bakery. Someday I’d like to have a similar story behind me! :) 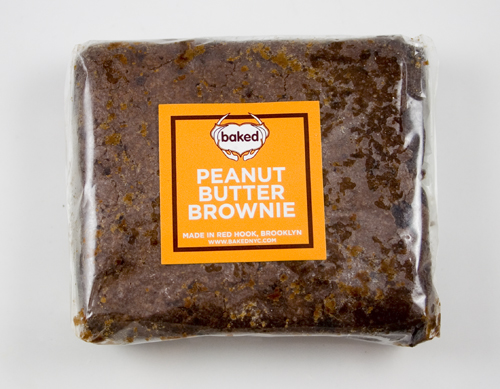 If you’d like to try making them yourself, here’s the recipe for their regular brownie which I’d like to think could be as good as the pb version.

And to convince you even further, these brownies have not only been approved by some chick named Oprah, but they also made Food & Wine’s list of The 8 Best Mail Order Brownies.

Thanks to Carla D for sharing yet another tasty treat with me!