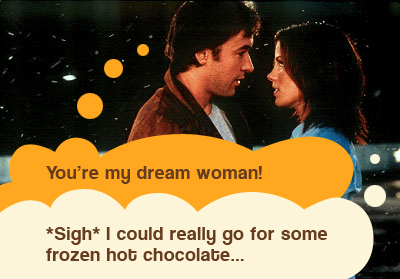 It seems that the second a restaurant in NYC (or anywhere, I’d assume) gets featured in a movie, it’s the new tourist hot spot. Well Serendipity 3 was featured in the movie… Serendipity with John Cusack and Kate Beckinsale. Serendipity came out in 2001 and ever since then, the similarly named cafe has been a tourist spot with crazy lines - not unlike a certain famous cupcakery. I’ve never been to Serendipity because I don’t have very much patience for the tourist spots in NYC but came across this recipe online for their famous Frozen Hot Chocolate… oh yeah… and this version’s got a bit of peanut butter in it. :D

While I still don’t understand why this dessert is called “Frozen Hot Chocolate” instead of a milkshake (cough gimmick cough) it sounds real tasty, which is reason enough for me to try it. At home. With no lines or tourists.

The movie looks lame but at least we got a dessert out of it! Enjoy the recipe at Group Recipes. If you’re interested in more of Serendipity 3’s recipes, check out their cookbook (they sell a few, but I assume the one with the photo of Frozen Hot Chocolate on the front has the original recipe in it).