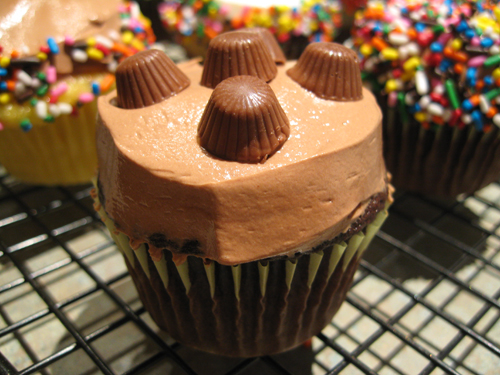 This was one of many cupcakes made a couple weeks ago for my sister, a high school math teacher, to give to her students at an end-of-the-year party. She didn’t request any particular kind of cupcake, so it made sense to go simple. The only thing she requested was that they have sprinkles and that I leave room on the icing for letters so that they could say something. The following was my train of thought on the way to the grocery store:

It got more complicated when I found these adorable little mini peanut butter cups at Trader Joes and could not resist buying them. They look large in the photo but they’re actually only about 1/2 inch in diameter. 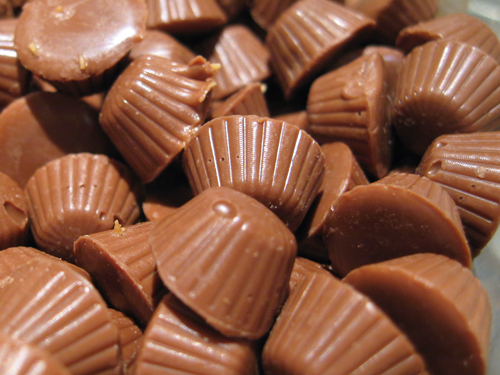 Once again my brain started going crazy thinking of ways to incorporate the peanut butter cups. Thankfully I exercised some self control, kept to the original plan and only made a single chocolate peanut butter cupcake just for fun. But oh, those pb cups will be back for another post sometime soon - just you wait. The sprinkles-on-the-edge icing technique as I mentioned was inspired by Crumbs Bakeshop in NYC. I’ve had their cupcakes many times and even got to eat one with comedian Todd Barry’s face on it.

To make these, you simply plop a bunch of icing on top of the cupcake, smooth the top with a small spatula, smooth the edges as well and then roll the edge of the cupcake in a bowl of sprinkles. Roll each cupcake in sprinkles immediately instead of waiting until you’re done icing the whole batch. If you wait, your icing may set and the sprinkles won’t stick. As you can see by the batch in the above photo, one of my cupcakes fell completely in the bowl of sprinkles. Oops! It’s still cute, anyway.

Recipe after the break.

These cupcakes were made with Betty Crocker’s Super Moist Yellow and Devil’s Food Cake Mixes. I’m sure I’ve mentioned these mixes before as they are my favorite cake mixes. You can top them with my favorite chocolate or vanilla buttercream icings. Full directions for preparing these cupcakes are included in the same post. Each box of cake mix yields about 18-20 cupcakes.

And for another recipe with these adorable mini peanut butter cups, check out these Teeny Tiny Peanut Butter Cup Cheesecakes at Vicarious Foodie.