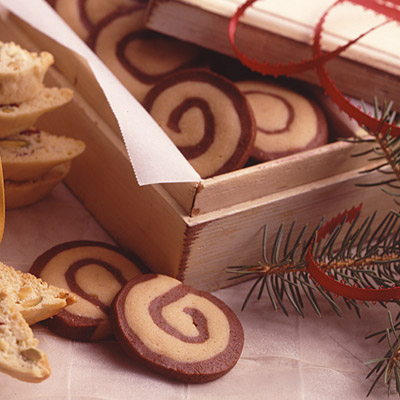 Before I get on with this post, I want to say for the record that I have loved every Martha Stewart recipe I have tried up to this point. I have a subscription to Everyday Food, which I just recently raved about and I also own her Baking Handbook and Cookie Book. A lot of people have asked me how the Cookie Book is, and though I have been satisfied with it otherwise, I am going to save you some trouble and warn you not to make one recipe in it…

I made pinwheels from Martha’s new book recently and I am sad to admit that they were completely disappointing. Homemade sugar cookies are a rarity in my kitchen as they are generally not indulgent enough for my sweet tooth. But for some strange reason, I had an intense craving for them, and after receiving Martha’s new book as a gift and browsing through it for a couple days, I chose her recipe for pinwheels as a worthy treat.

I took extreme care with every step, and these were not a quick cookie to make. You take two different kinds of doughs, roll them out, let them refrigerate, brush them with egg, layer em, roll em up, refrigerate again, slice, lay out on baking sheets and bake.

Phew! That’s a lot of work! But I was determined and excited to taste that sugary goodness. Sadly disappointment set in when I tasted the cookies and they had an overwhelming egg flavor instead. Did I use too much egg when I was “glueing” the chocolate and vanilla layers of dough together? I only used as much as it seemed was necessary. Were they supposed to taste like that? They certainly didn’t taste as expected. I was extremely careful with each step and after reviewing and re-reviewing the recipe, could not pinpoint a spot where I might have messed up. But it didn’t matter who the fault belonged to, the end result was the same: I did not enjoy these cookies.

To add insult to injury, when my taste tester took a bite (he had been forewarned that they were less than desirable) his assessment was, “they’re not bad, but you should have made pinwheels with chocolate and peanut butter.”

Well, thanks for that, taste tester. I’ll see if I can get the whole day I spent making these back so I can re-do them. Guess I should have made this recipe by Land-O-Lakes instead. The next time you think about making pinwheels, skip Martha’s eggy-chocolate-vanilla version and make these Chocolate Peanut Butter Pinwheels instead.

And here is a slightly modified recipe for Chocolate Chunk PB Cookies from Martha’s Baking Handbook.

And just because they’re too pretty and too much effort went into them not to post, here are pics of the not-so-tasty pinwheels. Such a tragedy, isn’t it? 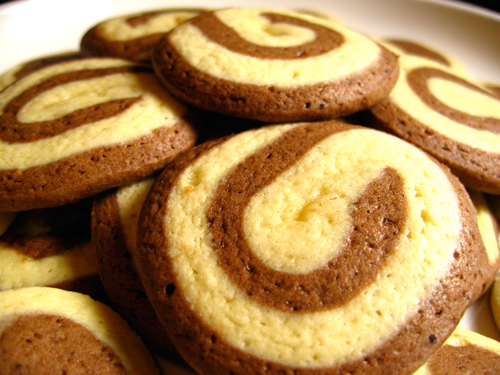 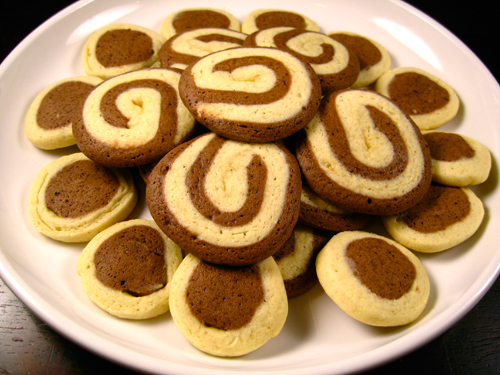