Wow, have I got a lot of fun stuff to show you today!

I have lived in the NYC area for most of my life, but decided to pretend to be a tourist there for you this week. But not just any tourist… a candy shop tourist!

I was a bit early for work the other day and since it was a nice day out, opted to walk there instead of taking the train. The route took me across town through the northern end of Times Square and just so happen to spot the Hershey Times Square Store on my way. I also popped into the M&M’s World Store which was conveniently located right across the street. Finally, yesterday I got out of work early and took a longer route home that included a trip to Dylan’s Candy Bar. I had been curious about Dylan’s for a long time, so my expectations for that stop were kind of high. But before we get to that, I bring you to the Hershey Times Square Store… This was not the first time I’ve visited the Hershey Times Square Store. I’ve also been to the Chicago location, which I can say (from memory - the last time I was there was three years ago, so forgive me if this is no longer accurate) is better than the NYC one. I specifically remember them having a section with all of the Hershey’s baking pieces, which makes sense since they sell A LOT of them. The NYC location is cooler looking with all it’s crazy light up signs and hershey kiss lamps on the exterior, but inside it’s disappointingly small and it seems as though you could buy most of what’s in there at your local pharmacy. There are t-shirts and teddy bears with Hershey’s product logos on them, and I also noticed some fun Reeses Peanut Butter Cup shaped / scented lip gloss, but aside from that there’s not really anything special. Though, I did like that they sold Scharffen Berger and Dagoba in the store. It’s nice to know you can get something besides milk chocolate there. The Reeses section of the store took up a surprising amount of real estate, but again, nothing special there, unless you’re in the market for a football or headphones with a Reeses logo on it. The M&M store was much larger than the Hershey store (3x the size at least) but incredibly disappointing. Most of the store was taken up by shelves of M&M t-shirts and mugs, only a few of which I thought were cute. They of course had the quintissential wall of M&M tubes. Disappointingly after looking all over the store there was only one tube in the whole place dedicated to the ever delicious Peanut Butter M&Ms. What’s up with that? I roamed around the M&M store for a bit hoping to see something other than plain old M&Ms in different shaped containers (really, they couldn’t come up with something more creative than that?) until I gave up and continued with my walk to work.

You’d think I’d have had my fill of candy stores for a bit, but no, the next day I was ready for more. I was released from work early, happily took my leave and headed over to Dylan’s Candy Bar. If I weren’t wearing healed boots, I might have skipped. 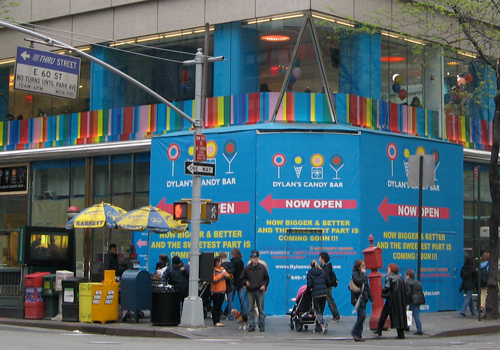 It’s under construction at the moment, but was very accessible during my visit. Phew! Wouldn’t want to be built up with all that excitement to finally go, only to be crushed with disappointment and unfulfilled candy dreams! First, I walked down the fun backlit candy steps to the bottom floor where most of the candy was located. It’s kind of sad to be walking on candy, but awesomely fun at the same time. 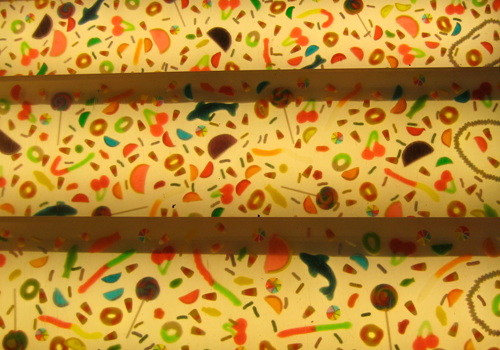 They even wrote their logo in candy which is encased in the steps! How fun! Dylan’s lived up to my expectations. While I can’t speak for the quality of their brand of chocolates since I didn’t pick any of those up, I can safely say that they sell a great variety of wonderful treats, both new and old.

Among some of the many fantastic things in the store, they had a chocolate fondue fountain, a jelly bean tube wall, a section of homemade chocolates (like clusters, chocolate covered dried fruits, pretzels, truffles, etc.), a section for classic and old school candies and some cute, brightly colored apparel. The upstairs level had a cafe that sold ice cream and other treats, which was adjacent to a party room.

This was the collection of goodies I left the store with: One drawback is that these tasty treats are a bit pricey, but you’re paying for the experience of the store, which is well worth it. All of the chocolate bars I bought were $2, except for the Zagnut and Pop Rocks Bars which were $2.50. So seven bars cost me about $17 with tax. Luckily for me, I tend to ignore prices on chocolate products since a few extra dollars is not enough to keep me from buying one.

Turns out I thought I left the store with two new bars to review here at The CPBG, but I was mistaken as neither the Zagnut or Abba-Zaba have chocolate! Whoops, sorry to disappoint you, but I was disappointed myself. The Zagnut is crunchy peanut butter with toasted coconut and the Abba-Zaba is taffy with a rich, creamy peanut butter center. Both of these as well as the Idaho Spud were discussed in Steve Almond’s Candyfreak, which was another big motivation for picking them up. I have been very curious about a lot of the bars mentioned in his book, though clearly I didn’t pay enough attention while reading it since I mixed up two of them!

Don’t despair though, here are two Chocolate Peanut Butter products that you can pick up at Dylan’s: It’s two bad that the Zagnut and Abba-Zaba do not fit the criteria for review on this site, which is that they have to contain both chocolate and peanut butter, so you’ll have to wonder elsewhere to read about them. Of course, your other option would be to take a trip over to Dylan’s Candy Bar, buy yourself a few and come to your own conclusions! I highly recommend a visit!

Haven’t had enough? There are more photos from my trip at flickr.

*Note: If you are wondering through midtown, I also recommend that you stop by the cellar in Macy’s ginormous 34th Street location. They hide lots of lovely sweets down there! And of course, if you feel like taking a short train or cab ride, head down to Economy Candy on the Lower East Side.

For more delicious places to treat yourself, check out this fantastic chocolate map of New York City!