Yesterday I went on Scott’s Pizza Tour, a tour that takes you all around various pizzerias of NYC (on a yellow school bus - awesome!) and tells you everything there is to know about NYC pizza. We learned a lot, ate a lot, laughed a lot- it was just an awesome experience.

But, this is not a pizza website, so that’s about all I am letting myself say about that. Find out more at Scott’s official site if you’re interested in experiencing it yourself. What I’m here to talk about is where we went on the way home from the tour. The pizza adventure ended where it started, in the lower east side, and luckily I remembered that Economy Candy was nearby. I had passed it many times before but somehow it was always closed as I walked by and the windows full of candy - literally full, you can’t see through them - would taunt me. It was Sunday and I feared the same bad luck might befall me again, but found it was my lucky day as I finally got to enter the golden gates… or regular old glass door. It’s hard to remember as I was in a bit of a dazed euphoria being in the presence of this candy mecca.

Being stuffed to the brim with pizza did not stop me from taking in every corner of the store. It’s not that big a store but every inch of shelf space is filled with candy. Are you in a plane, train or automobile yet and high-tailing it over there? This is the stash I picked up: 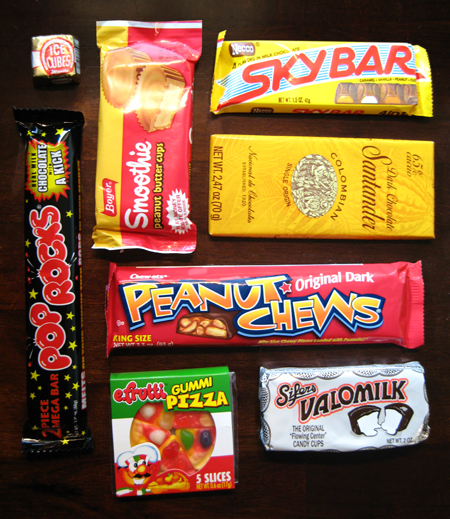 There are only two treats, the Sky Bar and Boyer’s Smoothie Peanut Butter Cup that have both chocolate and peanut butter. Steve Almond’s Candyfreak inspired me to pick up other chocolates such as the Valomilk (out of shear curiosity) and the Chocolate Ice Cube. I mentioned this book a few weeks ago when I had just started reading it, and just finished it the other day. It’s a funny and fantastic journey through America’s candy landscape. This book introduced me to old-school sweets I had never heard of and spoke a lot about how the candy business operates. I even came to discuss this book with a girl named Stephanie, a fellow pizza tour-ist who said that she enjoyed the book immensely and doesn’t even have a sweet tooth.

I’m going to have to save reviews of the Skybar and Smoothie Peanut Butter Cup for another day, so as not to risk sugar overload. We stopped at Sugar Sweet Sunshine after Economy Candy so I got my sugar fill polishing off a Sassy Red Velvet Cupcake with Chocolate Almond Buttercream. Because really, who can resist a cupcake? Not me.

Lesson learned: if you’re in NYC anytime soon, stop by Economy Candy. If you’re not in the area, you can purchase rare candy bars online at Old Time Candy.

It should also be mentioned that Scott is the person who lent me his copy of Candyfreak and gave out sweets from Economy Candy on his tour, one of which being the very appropriate gummy pizza. So thanks to him for being an enabler!