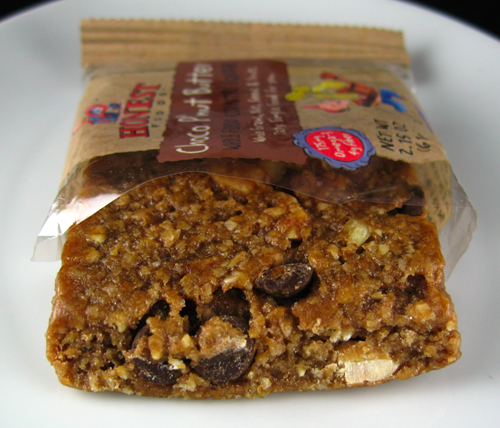 I’ve been on vacation the last few days and packed a bunch of protein bars for the trip. This Honest Food Bar was one of the many I’ve tasted.

I feel good about the Honest Bar before even biting into it. It’s got an Odwalla / Cliff Bar look to it. I see whole nuts and chocolate chips and anticipate confirming that I have found a new favorite protein bar.

My expectations prove pretty true. It’s taste and texture are similar to both bars. It’s a bit less dense than a Cliff bar, has a similar flavor to the Chocolate Chip Peanut Crunch Cliff Bar but shares the wonderful punch you get from tasting big, whole chocolate chips, nuts and oats in the Odwalla Chocolate Chip Peanut Bar.

As they love to say on Food Network, “you feast with your eyes first,” and though the texture looks wonderful, it looks to have a modest stature. However, it actually weighs in at 2.15 oz (61g) which hints that it’s dense. I took a double take when I read “(61g)” and thought it said “(big)”. The packaging is trying to play mind games with me.

During the first few bites, I noted the similarities it has to the above mentioned bars, but couldn’t put my finger on the one flavor that set it apart. I began to wish that I had the other bars on hand to do a side by side comparison. As the bar continued to disappear it became more apparent that the flavor must be sesame seeds. A look at the ingredients confirms my suspicion, though sunflower seeds are also on the list and think they might have something to do with it as well. This ingredient list is definitely a nice one to skim through: not much artificial sounding and I also like that the bar expires two months from when I bought it. It’s going to disappear quickly once it’s in my grasp, so short expiration dates aren’t inconvenient for me plus they point to the fact that it’s a more natural product.

This bar isn’t better or worse than the Cliff or Odwalla, it’s just a different version of them. A different change of pace depending on your mood: sesame or no sesame. It’s very similar overall and I would certainly buy it again, though I have a feeling the other two brands are more readily available. I did pick the Honest Bar up in Whole Foods, so it’s not as though you’d have to trek far, but to my knowledge these aren’t available in your average pharmacy or grocery store (yet).

My only complaint about the bar, which is just about a general complaint for most granola/protein/energy bars is that I wish it had a touch less sugar in it (it has 16g of sugar). Though to be fair, I’m eating it in the morning and sugar tends to hit me a bit harder earlier in the day as opposed to having this for an afternoon snack. It’s a small complaint and one that I’m willing to forgive. This is a good bar. 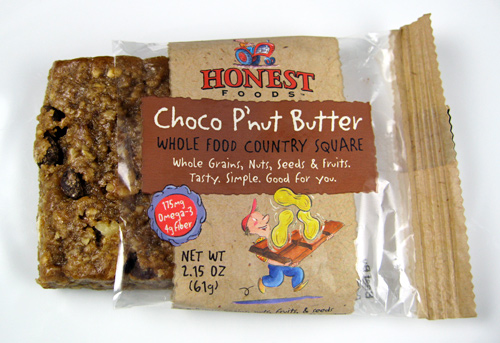 *Edit: Since writing this review, I have tried the Cran Lemon Zest, Farmer’s Trail Mix and Apple Spice Bars as well as the Pomegranate Walnut Crisp and Maple Almond Crunch Granola Planks. This “research” has proven that Honest Foods is great at what they do. Every one of the above mentioned products was delicious and disappeared all too quickly from my kitchen, but I think the stand-outs were the Apple Spice Bars (big chunks of apple - yum!) and the Pomegranate Walnut Crisp Granola Plank. The Granola Planks are great straight out of the box or in a bowl of milk. I highly recommend that you try Honest Foods Products if you haven’t yet!