I’m on vacation at the moment and stopped in a convenience store off the road for a snack. They didn’t have much of a selection of fine dark chocolate bars… I know, what kind of truck stop was this?! But all was forgiven when I laid eyes on a Nutty Bar. [cue choir: ‘Aaaaahhhh’]

Let’s just state the obvious right off the bat: Nutty Bars are not exactly the cream of the crop of gourmet treats. A hard truth to own up to, and maybe a shock to your system, but you’re just going to have to accept it. It’s made by Little Debbie and sells for a staggering 35¢.

35¢?!! Can you really buy anything for that little, let alone a tasty chocolate peanut butter treat?

This is where Carrot Top jumps out from behind some large inanimate object, yelling at me that I can make a collect call. No, wait, that was for $1. I ask again, can you buy anything for 35¢? If you think of something other than a Nutty Bar and go for that, you are a fool. Like I said, they are not exactly high end but it’s chocolate + peanut butter + wafers (it should be known that I ♥ wafers). It’s a bit cheap tasting, yes, but again: 35¢. The wafer is aerated and light and the peanut butter layers and chocolate coating are thin, making it a satisfying snack that doesn’t weigh you down, like other richer c&pb snacks might. Though it might weigh you down if you finish it all in one shot, but that’s your problem, not mine. It’s 300 calories (half of which are from fat) and you get 2 wafers in the 1.9 (54g) package. I’m not sure how it compares to a Reeses Stix or peanut butter Kit Kat Chunky Peanut Butter, but that’s another post.

All of this is just talk though. I’m mostly just giddy from finding a beloved snack that I haven’t seen in ages. Nutty Bars are a true childhood favorite of mine. Upon our re-acquaintance, it didn’t have to taste wonderful, really as long as it didn’t taste like chalk when I opened it, I’d probably still be jumping up for joy. But it’s flavor lived up to my childhood memory, which made it all the more sweet tasting. Now if I could just get my hands on a Funny Bone… 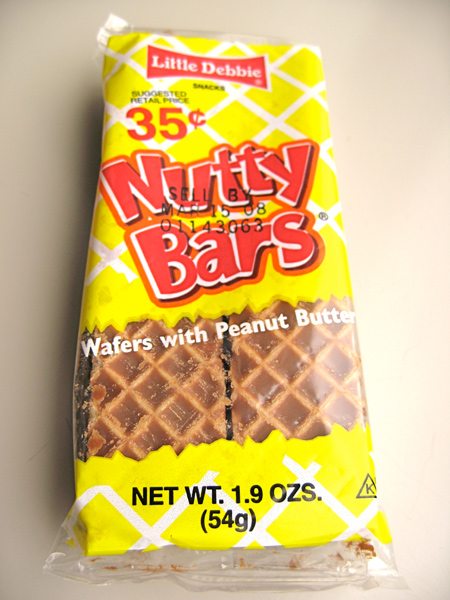