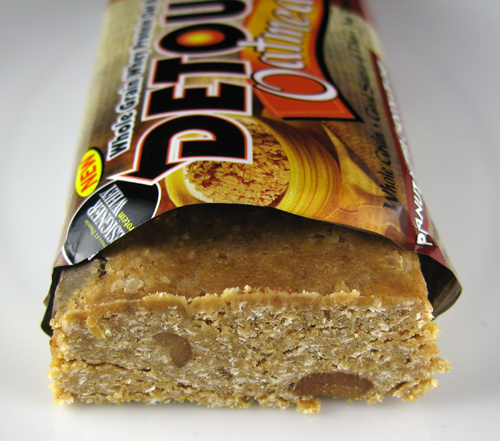 I woke up this morning and decided to choose one of the three protein bars in my pantry for breakfast. Normally I might choose the bar with the prettier packaging, but my growling stomach encouraged me to pick the largest and heaviest of the three which was Detour’s Oatmeal: Peanut Butter Chocolate Chip Bar. The tagline calls it a Whole Grain Whey Protein Oat Bar and claims that it has “Designer Protein Whey”. I’m not sure what that means exactly, but I’ll assume it’s good.

The facts: It’s a whopping 4.2 oz (120g) and 460 calories (110 from fat) which is much larger than most bars I’ve come across. It’s got 10 grams of sugar which is pretty good, especially considering it’s size. The first ingredient is their prized designer whey protein, but the fact that it looks to have whole chocolate chips and peanuts is much more interesting to me.

Detour’s website declares that the bar has 30 grams of protein, high quality whey-protein, whole grain oats and a good source of fiber and complex carbohydrates. It also claims that it tastes delicious which is a bold faced lie.

I couldn’t figure out what the flavor reminded me of at first, but then realized it was similar (not quite as good, but similar) to a PowerBar, which I tend to like. Detour’s bar has a bit more texture, like a PowerBar but with whole oats mixed in. The bar is pretty chewy though more crumbly than the PowerBar. The photo of it on the packaging proves correct as I find whole chocolate chips and peanuts after just a bite or two. This is a nice sight since a lot of protein bars are just a blended brick of stuff (ie. the PowerBar).

Based on the contrasts listed above you’d think this bar would be a step up from the PowerBar, but you’d be wrong. Though their flavor is in the same league, this bar is more artificial tasting, and has an odd almost chemical flavor to it. After I made enough notes about it for this post, I chucked it half way through. I was left with an unpleasant chemical/cocoa aftertaste and a wish that I had chosen one of the other bars for my breakfast instead.

Though the PowerBar is just a blended brick of stuff, the flavor is far superior. I’ll stick with those instead since this is not a bar I will be purchasing again.